New publication on e-democracy in Europe

The book "Electronic Democracy in Europe" edited by ITAS jointly with Fraunhofer ISI and ITA Vienna explores the current state and the perspectives of web-based political communication at the European level. 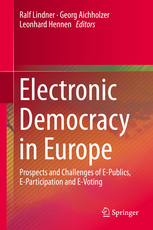 The book is based on a study conducted on behalf of the European Parliament and systematically addresses the intersection of e-democracy and European politics. This volume, edited by Ralf Lindner (Fraunhofer ISI), Georg Aichholzer (ITA Vienna) and Leonhard Hennen (ITAS), contributes to an improved understanding of the role that new media technologies play in European politics. The potential impact of Internet-based political participation processes on modern-day representative democracy in Europe is also analyzed.

A unique, holistic approach is taken to examine e-democracy’s current state and perspectives in Europe in three, partially overlapping and interlocking fields: e-public, e-participation and e-voting. Thus the authors provide theory-inspired reflections on e-democracy’s contribution to the formation of a transnational European public sphere. They also offer empirical analyses of contemporary e-participation phenomena such as the European Citizens’ Initiative or e-voting practices in Estonia. Based on the presented findings, the concluding chapter combines a prospective outlook with recommendations for future paths towards the meaningful integration of e-democracy in European politics and governance. (30.05.2016)


last change: 2016-05-30 KIT – The Research University in the Helmholtz Association