Energy from grassland – a sustainable development? 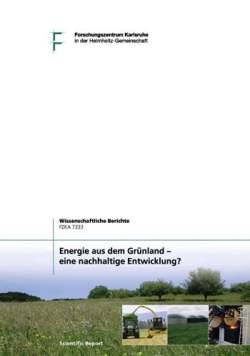 In many regions of Baden-Württemberg permanent grassland is shaping the landscape and fulfils important functions in the protection of nature, soil, and water. However, traditional ways of using grassland for forage production are vanishing as a result of progress in breeding, the technological advance in milk production technology as well as structural adaptations in agriculture. According to calculations, about 167 000 ha – over one quarter of the total grassland in Baden-Württemberg – will no longer be used for animal husbandry until 2015. Almost 90% of this surplus area could be applied for the production of energy. In this study, the applicability and economic efficiency of different techniques for energy production from intensively or nonintensively used grassland as well as from grassland converted into maize fields or shortrotation poplars – the conversion of grassland is still possible to a certain limit – was analysed.

On the basis of the integrative sustainability concept developed by ITAS and 18 sustainability indicators selected, a comprehensive evaluation of the different technologies was made. The material and energy flows were balanced by means of a life cycle analysis program. In general, the different utilisation paths have both positive and negative impacts on aspects of sustainability. Positive effects of the use of grass for energy production are the preservation of biodiversity, the protection of soil, water, and the cultural landscape as well as the savings of nonrenewable energy and the reduction of greenhouse gas emissions. However, the emissions increasing health risks, acidification, and eutrophication are counting negative. Even when agricultural policy premiums paid and the financial support for the promotion of renewable energies are taken into account, the production of energy from grass silage or hay is only in exceptional cases economically efficient. Despite the relatively high energy prices and the strong financial support, effects on employment and income in agriculture will be modest. Short-rotation poplars on converted grassland are comparatively advantageous from the economic and ecological point of view. Therefore a development plan for grassland is needed to identify areas where grassland should be preserved and where it could be modified or even converted for example into short-rotation polar plantations.