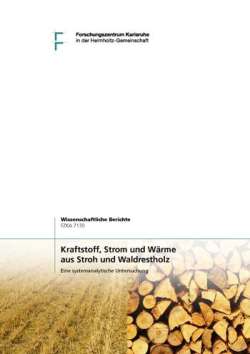 As a result of the significant raise in energy prices since 2004 and the increase of greenhouse gas emissions as lately reconfirmed by the IPCC report 2007, on both the national and EU level ambitious targets were set regarding the development of renewable energy sources. In the EU for instance, until 2020 renewable energy sources should cover 20% of the total primary energy demand and 10% of the fuel demand in road traffic. High expectations are mainly tied to the use of biomass. These framework conditions lead to an increasing competition, because heat and electricity as well as fuel can be produced from biomass.

Against this background, a systems analysis was conducted by ITAS with the objective, to analyse and assess the "Biomass-to-Liquid" (BtL) concept – so called bioliq® concept currently developed at the Forschungszentrum Karlsruhe – for the production of fuels from biomass with regard to technical, economic, and environmental aspects. For this, the specific advantages using the dominant biomass sources – straw and wood residues – as well as the disadvantages of this technology were identified, and the concept was compared to competing alternatives for the production of heat and electricity. Initially, taking the federal state of Baden-Württemberg and selected plant locations as an example, the volume of straw and wood residues which is available for energy use was outlined, as well as the supply costs for these biomass sources.

Starting point for the technology analysis regarding liquid fuel production from biomass was a detailed description of the present status quo of fast pyrolysis, gasification, gas cleaning/ conditioning, and Fischer Tropsch (FT) synthesis. Assuming the combined use of straw and wood residues, the economic estimates for energy self-sufficient plants reveal that FTfuel can be produced at costs in a range from 0.90 to 1.00 € per litre, free plant and depending on plant capacity. If this biogenic fuel is not additionally charged with mineral oil tax, it could compete with fossil Diesel at crude oil prices of 65 $/bbl. The biomass supply accounts for 50-65% to the production costs of FT-fuel, depending on the assumed plant capacity. The comparison of the production of FT-fuel with heat and electricity production reveals that these alternatives are closer to competitiveness or have already reached competitiveness in Germany. The study shows that the production of heat from wood residues is competitive with fossil heating oil without subsidies by the state.

The CO2 mitigation costs for biogenic FT-fuel are clearly above 200 € per Mg CO2 equivalent; regarding the electricity production they are in a range below 100 € and for exclusive heat production they can be even negative. These results concerning CO2 mitigation costs suggest not using the CO2 mitigation strategy as a central argument for the promotion of FTfuel production from biomass. But because the BtL concept of the Forschungszentrum Karlsruhe opens up new ways to use biomass as carbon carrier for other chemical purposes, this technological path should be pursued definitely.