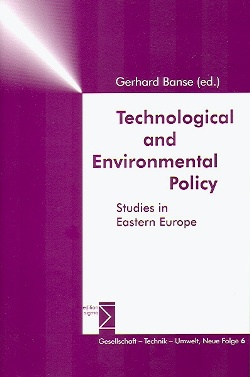 “Terra incognita” – this is how one could describe, surely a little exaggerated, the situation in the middle of the 1990s which many of those dealing with interdisciplinary technology and environmental research in the Federal Republic of Germany – but not only those! – found themselves in when they looked “east” into the countries of Central, Eastern and South-Eastern Europe, representing about 20 sovereign countries in the succession of the former socialist states. It was “unknown land” – also regarding the knowledge here of e. g. the situation of the environment, restructuring in industry and agriculture, transformations in the field of science, or approaches in technology policy on the other side of the rivers Oder and Neiße, the Erzgebirge mountains and the Bohemian Forest.

But in the past years a lot has changed here: improved situation regarding information, better understanding of the respective problem situation, joint activities. This is also – but not only! – the result of intensive, diverse and systematic cooperation relationships of the Institut für Technikfolgenabschätzung und Systemanalyse with scientific institutions mainly in Poland, Romania, Russia, Hungary, the Slovak and Czech Republics in the last years.

The aim of these “go east” ITAS activities is, on the one hand, to “watch” institutional and content-related activities in the field of interdisciplinary technology and environmental research (monitoring) in order to create starting points for cooperation opportunities. On the other hand, bi- and multilateral activities should be carried out to concentrate and combine different conceptual as well as methodological knowledge in the fields of technology risk assessment and environmental research. This mainly concerns

Since these activities form the background of this book, they should be considered in more detail. It is not possible to list all cooperation partners here, especially since some contacts were or are only temporary for reasons of time or personnel. But the following should be mentioned as examples:

not only diverse results were produced, but important contributions were also made to mutual understanding (personally and regarding content). The following results are given as examples:

An important result of this systematic and long-standing cooperation is that new institutionalised forms, going beyond close partnerships, were looked for and established . Only three of them, in the founding and content planning of which ITAS was involved, shall be mentioned here:

These activities faced (and partly still do) the following difficulty: political power constellations are changing as the basic economic conditions do, potentials of science were reorganised or newly organised just as the administrative bodies on state and regional level. Thus, both political aims and priorities and opportunities for social interference and action changed as well (occasionally very quickly). Consequently, there was often a lack of time and continuity required for consolidation and differentiation processes. Therefore, it was and is often difficult to emphasise existing or general facts. For this reason, the results and the continuity of cooperation are to be valued even more highly. However, one aspect becomes clear: with the transformation processes of the last fifteen years in these countries the opportunities in the field of interdisciplinary technology and environmental studies have improved on the one hand, but, on the other hand, they have also deteriorated at the same time: improved, since there is a stronger scientific recognition, social need and political desire for such investigations as a means of policy advice and decision preparation than before; deteriorated, since in the individual countries both the overall industrial and financial conditions and the situation on the labour market are generally more unfavourable and thus the funds for considerations preparing and accompanying mechanisation projects in the interest of policy advice and social decision preparation are (probably) very limited. The necessity for interdisciplinary technology, innovation and environmental studies in these countries is also due to the following “boundary conditions”:

The contributions summarised in this book refer to different aspects of this situation, partly giving detailed descriptions and mainly offering suggestions for solutions. They are primarily “insiders”, who, if they are not actors, are at least observers, but who are definitely “concerned” by the transformation processes taking place. These contributions are mainly to be understood as “case studies” for the collection, systematisation and tentative generalisation of material which serves as basis for the proposals to be developed. According to content, they were divided into “Technology Assessment and Sustainability” (Part I) and “Innovation and Economic Transformation” (Part II). The book begins with a contribution on the importance of scientific knowledge in and for the modern age. In the texts it becomes obvious that in the individual countries own ways have to be developed, independent solutions have to be found and own experience must be gained. At the same time this indicates the limits of the transformability of knowledge generated elsewhere – i.e. under different economic, political, social and cultural conditions – or – in other words – it indicates the relationship of general approaches and concrete, specific national conditions.

The publisher would like to first of all thank the authors who were willing to supply and update the texts, to Gotthard Bechmann, who helped acquire contributions, to Sylke Wintzer, who proofread them, to Waltraud Laier, who prepared the layout in proven manner, and to the publishing house edition sigma (in particular its head Rainer Bohn) for the patience regarding the submittal deadline for the script, which was more than due …