Rationality in an Uncertain World

Introduction: Initiating a Forum on Sustainable Technological Development in a Globalising World 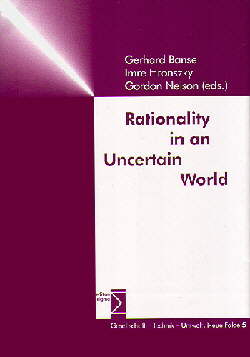 Why do we need a forum on technological development? The answer requires a bit of explanation. Modern societies are engaged in innovation. A substantial part of innovative effort occurs as technological innovation. We live more and more through technology. Our life, social relations change with new technologies. Developing any new technology, as any innovation, is also engaging in a semi-structured "social experiment". This "experimentation" leads to partly forseeable, partly unforseeable results that are realised through the interaction of technology with its natural and social environment. This 'experimentation' needs as much conscious reflexion on it as possible, anticipation and learning the consequences of applying new technologies, to try to orient it.

While this social experimentation through developing new technologies repeatedly opens evolutionary possibilities for society, even to develop new values through utilisation of new technologies, all these raise the problems of safety. Most of us are eager to utilise new technologies for our purposes, but simultaneously their safe utilisation is required. Currently, using or abusing technological development for mankind gets an even more shocking dimension by the threat of worldwide terrorism. Security of technologies, to differentiate it from simple safety (the socio-technical system as a whole being different in both cases, and with this having a strong effect on the construction of technologies) is becoming an unavoidable requirement for technological innovation. So, sustainable technological development for a sustainable society (based on its sustainable nature dimension) needs a complex series of innovative efforts and anticipatory actions of safety and security on a global level. This balancing effort can only be realised through the co-operation of the widest circle of actors in the "technological arena". The widest variety of social agents, from individuals and groups, to firms, movements, institutions, states, etc., must be called upon to engage in conscious reflection and ongoing co-operative discussion on the complexity of both strategic and tactical measures for developing sustainable technologies.

The problem of sustainability in relation to nature is now widened to the problem of sustainable societies. Among other things a deeper understanding of the dynamics of poverty is needed to the successful construction of these expected sustainable societies. Furthermore, quick technological progress brings with it the pressing problem of exclusion through missed access to new technologies, on a worldwide, regional, country, or community level, down to individuals (i. e, the digital divide). With any new technology we risk developing new technological divides, with the subsequent social and political tensions. Each new technology brings with itself the new overall problem of the ethics of artificially produced resources of life worthy of human beings.

We have learned that the original problem of sustaining nature as the basis for all social development is a problem that must be handled through managing a complexity of different types of social sustainabilities. This has led to the socalled three pillars understanding of the sustainability of nature. Balanced technological development is a main element of successful transition toward sustainable societies. If we want to put a slightly different emphasis on the technological dimension, we must emphasize the needed development toward sustainable technologies not only in their relation to nature but also in the possible "social divides" emerging from such new technologies. This is one specialty of our Forum. Further, the realisation of a balanced technological development needs a continuously reflected co-evolution of technology and society toward sustainable development. To emphasize this is the second feature ofthe Forum. An integrated, transdisciplinary body of work, called "prospective technology studies", appropriate for this purpose, is already beginning to develop. Third, the history to date indicates that the appropriate management of the problems of new technologies needs a conscious effort among the various agents of technological change. To provide a discussion forum devoted to cooperative efforts is also a prime purpose in establishing this Forum.

With globalisation, we can say that the complexity of interactions in the whole social-nature system is growing, and with it the uncertainty surrounding us. Social processes are more non-linear than earlier and the inherent incertitude in the processes of the natural environment is not negligable anymore. Further, knowledge needed to make rational policy decisions is getting strongly uncertain. All these argue for an introductory reflection on more narrow technology topics, like the discussion of the chances and dangers of the development of "converging technologies". This reflection should be on the nature of uncertainty and its rational management. The first workshop of the Forum was entirely devoted to this topic and its presentations are included in this volume.

Something on the story of the origin of the Forum and organization of the first workshop is also in order. Two universities, Florida Institute of Technology (Florida Tech) of Melbourne, Florida, and the Budapest University of Technology and Economics (BME) have cooperated beginning in 2001, supported by a U.S. State Department CUAP grant for three years in the field of environmental protection and environmentally sustainable technologies (environmental studies). The Department of Innovation Studies and History of Technology of BME also recalled the long period of cooperation with the Institute of Technology Assessment and Systems Research of the Research Center of Karlsruhe (ITAS/ Forschungszentrum Karlsruhe), with the University of Basque Country, and with the earlier head of the Research Evaluation Unit of the DG Research of the European Committee, Dr. Gilbert Fayl, in his personal role (he recently became foreign secretary of the European Academy of Sciences and the Arts). When BME and Florida Tech people met, in June 2002, in the nice small Hungarian town of Eger to conduct a "Sustainable Tourismus" workshop, Profs Gerhard Banse (ITAS/Forschungszentrum Karlsruhe) and Imre Hronszky (Department of Innovation Studies and History of Technology of BME) told their idea to Profs. Gordon Nelson (Florida Tech) and Nicanor Ursua (University of Basque Country) to initiate and develop a process to provide far a (loose) organizational forum for discussing how technological development can be made sustainable. It was decided that these institutions would try to develop and realise an international workshop devoted to this goal. Prof. Imre Hronszky, vice-president, and Mr. Peter Gresiczki, secretary general of the Hungarian UNESCO Commission promised that the Hungarian UNESCO Commission will also do its best to support the Forum.

Three main ideas were put into the focus. One was that a continuous discourse between European and US institutes could make the discourse trans-Atlantic. To this was added the perspective of UNESCO, and through this the thought that the views and interests of less developed countries should also be represented. It was also agreed that a continuous effort should be made that the workshops be multi- and transdisciplinary as far as possible and should represent different research and participant perspectives (under participants we understood them not only to be scientific researchers but also students, representatives of firms, governments and NGOs).

As the topic to concentrate on in the first year was chosen "Rationality in an Uncertain World", for the second year "International Sustainability", and for the third to look at the social visions around the so called "converging technologies", the recent and expected developments of nanotech, biotech, infotech and cognitive science. (Concerning this third topic the NSF has initiated a comprehensive research programme and the EC followed it four years later. It seems that the perspective of the less developed countries, that a new type of technological, and on this basis, social exclusion will emerge in the field of converging technologies, and should also be added to the first two research perspectives.) The initiators of the Forum hope, with the help of UNESCO, to turn attention to a possible new, coming exclusion process, after recognition of the existence of the social exclusion in informatics.

Based on the invaluable importance of a trans-Atlantic discussion, the initiators decided on trying to realise yearly workshops alternately in Florida and in Europe. So, it was that the first Forum was realised in Budapest, with BME as local organizer in December, 2003. The second Forum was realised in 2005, in a modified form in Melbourne, Florida, at Florida Tech, and a third will be realized at BME in Budapest, repeatedly through the main sponsorship by the UNESCO.

The first workshop was jointly organized by Imre Hronszky and Gerhard Banse and thirty participants came from thirteen countries from three continents. They were mostly professors of their speciality, but also students and governmental specialists, including the EC took part. Natural science, technology, social science and humanities were represented in the presentations.

The workshop was opened by the Pro-Rector for Education of BME, currently Rector of the same university, the Secretary General of the Hungarian Academy of Science, and representatives of the Hungarian UNESCO Commission, of Florida Tech, and of ITAS/Forschungszentrum Karlsruhe. The introductory presentation was given by Armin Grunwald (ITAS/Forschungszentrum Karlsruhe). The workshop was organized into five sessions:

The readers of this book are herewith provided a representative collection of the papers presented at the workshop in Budapest, December 2003. The editors thank all authors for the contributions and the publishing house edition sigma, Berlin, for the assistance in the field of formatting and printing this book.