Across the Divide
Work, Organization and Social Exclusion in the European Information Society 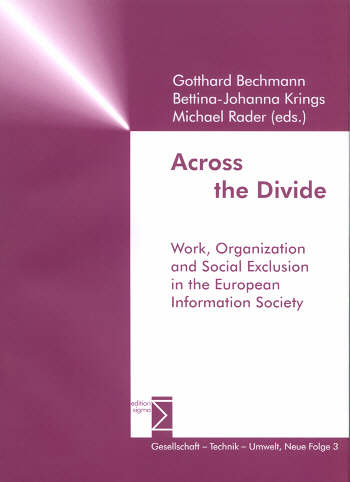 The centrepiece of this publication is the advancing informatisation of industrial and public organisations and their related work procedures. Informatisation does not primarily mean the introduction and application of new technologies, but the penetration of all processes of organisation and work by activities dealing with information. The introduction of new information and communication technologies is regarded as a strategy to completely overhaul industries, administrations and working processes with the aim of adapting them to the conditions of an increasingly globalised society. ICTs are more and more used to rationalise, accelerate, and support information and communication activities.

The articles in this volume are based on presentations at a conference which took place in November 2000 at Karlsruhe Research Centre in the framework of the SOWING project (Information Society, Work and the Generation of New Forms of Social Exclusion). With the exception of the contributions on e-government and the three articles by Juliet Webster, Ian Miles and Frank Webster all articles are a direct result of the SOWING project and report findings from its research. In the meantime, the final report has been formally accepted by the European Commission and is due for publication in 2003.

The SOWING project (supported by the European Commission 1998-2000) united research groups from Belgium, Germany, England, Finland, Ireland, Italy, Austria and Portugal. The project's aim was to describe the informatisation of firms in the manufacturing and service industries in selected regions of these countries from a comparable perspective with respect to prevailing technological practices. The project was led by Professor Gerd Schienstock of the "Work Research Centre" of the University of Tampere in Finland.

In the project, a research approach was selected, focusing closely on the information society, at the same time still directed towards the overarching economic and social concerns of TSER. The approach consisted of the deliberate abandonment of the otherwise widely held opinion that societal change in the direction of an information society is determined solely by the new information and communication technologies. The correction of this conception was suggested by sociological research on technology during the past two or three decades. All precise analyses prove that technological development by no means follows an immanent logic of technology, but is involved in a complex mutual relationship with societal developments. By this inevitable change of perspective, the project gained a conceptual link between "technology" and "society".

The societal dimension of the discussion on an information society refers primarily to the change in economic structures. Correspondingly, the project concentrated on issues of organisation renovation of manufacturing and service companies and on development on the world of work in relation with the diffusion of the new technologies. This diffusion and the broad variety of application forms of information and communication technologies are classified by the bracket term "informatisation". The conceptual instrument for the empirical observation of corresponding changes inside enterprises and their social environment is "technological practice", which is understood in the sense that it encompasses technological and social elements. The versatility of this term is, for example, demonstrated by the fact that it can be used to link with the classic discussion on "enterprise culture". Even the case of celibacy with respect to new technologies can be described as "technological practice". The term in particular does not restrict itself to the formal organisational structure of the firm, also extending to the formal and informal structures of the world of work, thus, for instance, adequately addressing the special issue of new forms of social exclusion in connection with the new technologies.

The integrated approach, which points to the close relationship between fundamental restructuring processes in companies and social exclusion aspects, also has policy implications: policies aiming at supporting business restructuring processes need to be linked with policies dealing with labour market. Together with techno-organisational restructuring processes companies' demand for various qualifications, skills and competencies is changing. Here there is disagreement with the argument of a 'skill-biased technical change' as this associates the shift in skill demands with the rapid diffusion of modern ICT only and not with the related organisational changes or new company strategies. It also assumes a simple tendency towards higher skilled labour, while it does not focus on new skills and competencies. But there is no doubt that the emerging new technological practices will have serious consequences for the labour market, which makes a better co-ordination of the above mentioned policy areas necessary.

Empirical findings show that the application of modern ICTs within the companies of the regions participating in the project has progressed significantly; increasingly more complex technical solutions are introduced. However, this does not automatically imply a change in the usage of ICTs, there is no clear trend from automation and control technology towards information and communication technology as is often assumed. Instead, there is need to stress the multi-functionality of modern ICT, they can serve several functions at the same time. Due to the fact that modern ICT represent multi-functional technologies, it is not possible to identify a clear trend towards a new organisation logic represented by the Leitbild of a network organisation. Instead, companies apply different types of techno-organisation structures: low-tech Fordism and high-tech Fordism as well as low-tech network organisations and high-tech network organisations. The ICT-based network organisation is actually not very widespread yet; the SOWING research suggests the conclusion that companies in the participating regions are structurally more conservative.

Concerning demands for new skills and competencies, one may conclude that digital skills play a rather limited role in the transformation process compared with social and learning skills. Consequently, lacking digital skills hardly represent a risk of losing one's job and becoming excluded from the labour market. Temporary work contracts and processes of outsourcing and down-sizing carry a much higher social exclusion risk, although companies in general try to cope with the related employment problems in a socially beneficial way. Less skilled elderly workers represent a social group which is particularly at risk of becoming degraded and even expelled from the labour market, as adapting to new techno-organisational structures is often beyond their capability.

So far, it can be concluded that we are just at the beginning of the transformation of the economy into a network-based information economy with little evidence of massive exclusion and segmentation problems. Of course, there are regional differences with respect to both: the dynamic of techno-organisational restructuring on the one hand and labour market structuration and social exclusion risks. There is no single European path into the information economy. The fact, however, that ICT-based organisational restructuring is more an emergent than a completed process makes it very important to further monitor employment risks but also possible opportunities associated with the emerging information economy. This will give time to warn policy-makers about the potential exclusion risks of specific social groups in information economy.